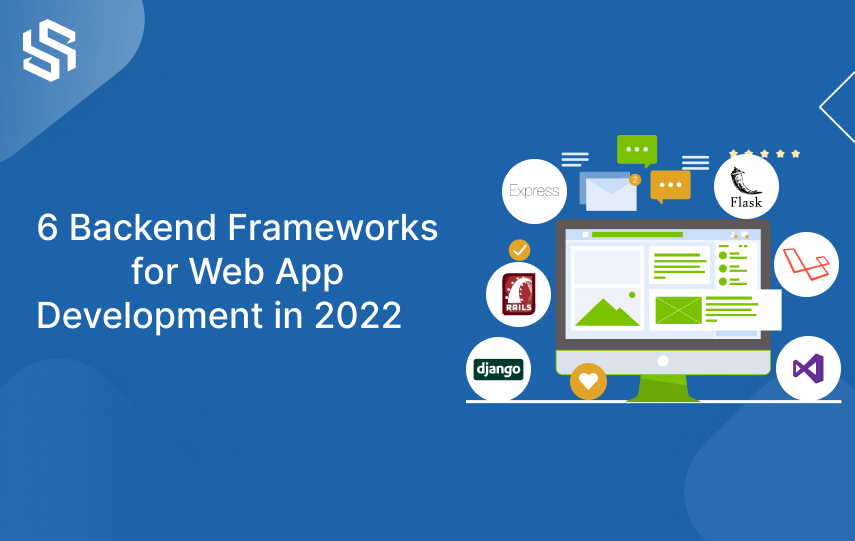 Web frameworks are now an intricate part of developing web applications in web application development company for both the front and back end. They provide a foundation for designing great web apps that function smoothly, load quickly, and scale up readily. Just as there are so many options to select when choosing what flavours you’re putting into your tasty recipe book on its own, so are many backend framework solutions to choose from. Now that more companies are jumping on board with being agnostic when it comes to using tools based on their standards of technology stacks, we’ve put together a list of the prominent ones out there used in web development that stand as good examples today!

What is Backend Framework?

A backend framework is a collection of tools and modules (or software development kit) which are important to the architecture (the design/construction of a building and software system) of web apps, designed specifically to make tasks simpler, easier and convenient for developers. The best backend framework makes it easier for developers to get started by eliminating the requirement to construct and configure everything from scratch. A great example is Ruby on Rails: the only route you need in your development. For Java developers, there’s Spring Boot. Finally, Node.js has Express for rapidly building Node apps.

What is the Need to Have a Web Application Framework?

What are the Different Types of Web Frameworks?

Client-side frameworks are a boon to both small and large companies alike, especially in development work. They make it easier for developers to create a beautiful new interface for users without worrying about non-glamorous backend programming. In addition, many animated functionalities can be created via Single Page Applications, or SPAs (internally known as SPAs), which are designed specifically for single-page web applications that suit almost every business imaginable. Each of these front-end frameworks is founded upon its completion principles and offers diverse client-side development resources.

The architecture of a web framework allows you to build and manage pages, landing pages and various forms while delivering output data. Furthermore, framework servers not only improve the overall efficiency of your project but also provide security during web attacks since they enable you to filter out bad requests by validating your code against the server.

What are the Best Backend Frameworks to Use in 2022?

Some of the best backend web app frameworks offer high performance and fast development so let’s take a look at them in detail.

Django is a high-level framework that’s full of great features. As a result, it can help you create large-scale, database-driven, interactive web applications even faster than before! Django eliminates the need to install or maintain third-party plug-ins because everything works so well together. It’s perfect for building a site that needs to scale and handle traffic regularly.

Ruby on Rails usually refers to the programming language Ruby used in the framework combined with the Model View Controller. Yet, this combination needs more than just two things to be functional. The framework also requires JavaScript, CSS and HTML to create complex applications that can be run on a database. So, while getting started with Rails is similar to any other web application, building dynamic apps full of interactivity can sometimes be difficult.

Express.js is an excellent Node.js framework for building apps and APIs. Since it is lightweight, it’s a cinch to get started with the Express API kit, which provides ready-to-use components for online and mobile applications built using Node.js 4+ or higher environments. According to a survey, 23.82% of respondents ranked this MEAN stack framework as one of their top 5 web frameworks in 2021, compared to 25% in 2018!

There has been a lot of talk about this new generation of web frameworks based on the Go programming language, known as Golang. More specifically, a framework called Gin Gonic seems to have major user adoption. The framework enables integration with trusted open-source libraries and functionality ideal for building high-performance REST APIs. One of its key benefits is an increasingly popular microservice architecture, enabling easier scalability and more efficient management of large projects.

Laravel is a PHP framework that provides functionalities for creating Symfony-based web projects. Devs consider it one of the best web frameworks as it lets them easily create several web applications with larger functionality. In addition, it allows developers to handle app management and deploy various contents remotely.

ASP.NET Core (previously named ASP.NET vNext) is Microsoft’s open-source and cross-platform web framework optimized for building cloud-based, data-driven, mobile-first applications for Web API, MVC and Web Pages. It’s a modular framework with a host of new features and enhancements, including simplified configuration in an improved development environment. You can do the following with ASP.NET Core:

Many tools help you to develop websites. It’s best to pick a tool depending on what you have in mind for your website and ensure that other features of the tool will get it finished. Also, remember to update the tool regularly or else you could miss added features! You can always reach out to Syndell for more information on mobile app development and its services.