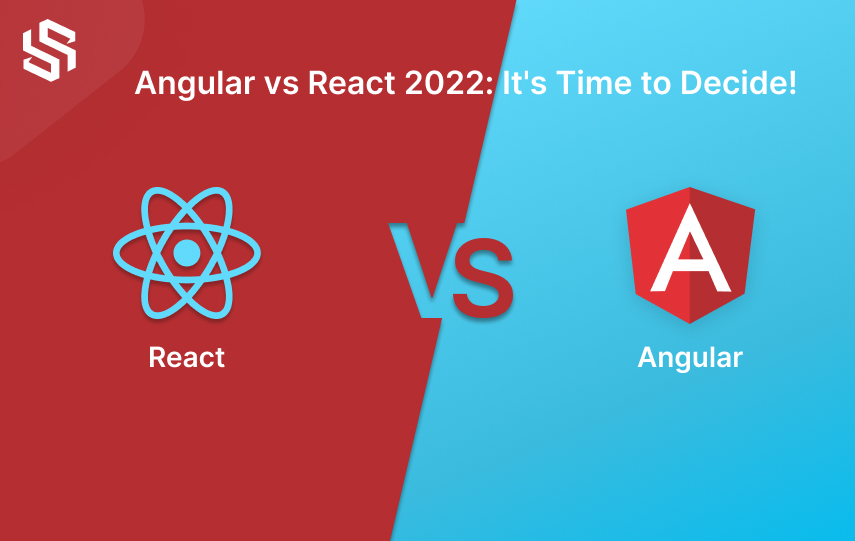 Choosing the right to react native app developer can be difficult, to say the least, especially with so many options available and most of them extremely resourceful and capable of facilitating any type of web project requirement. But choosing a framework for certain web development projects comes with a unique set of criteria you must know about before selecting. Therefore, we will cover some essential points in this post by giving an Angular vs React comparison.

At some point, it can feel like adding just one simple feature will take a lot of effort. You start to lose faith in your understanding of the framework you’re using to build with. It’s a tough situation to be in – the struggle is real! Angular vs React is an ongoing debate, but we don’t refer to it as one because we want to minimize confusion for our clients. How often do people ask us about the benefits of react js? We know a lot of entrepreneurs are wondering about this themselves! For more information on which framework would be best for your next project (or if you’re interested in chatting with us about it), please get in touch!

There is no doubt that both Angular and React are great frameworks. In this blog, we will discuss the main differences between the two and which could be considered better in individual scenarios.

React is an open-source JavaScript tool that can be used in building user interfaces or UIs. Its component-based and declarative traits help developers create complex and interactive UIs by doing a single code change. In addition, it has its own learn once, write anywhere principle, which helps the developer build the app for all platforms easily without additional code changes. It is managed by Facebook and a community of individual developers and communities.

Angular is a web development platform based on TypeScript. It’s component-based, making it easy to modularize your project and scale it appropriately. One of its best features is client-server communication — this allows data to remain consistent even if there are users who’ve lost their internet connection as the data will be stored on the servers! Other killer features include router modules that make navigation between the different sections of your website easier than ever before. Best of all, Angular is updated often by the team at Google to ensure you always have access to its latest technology!

Angular is a framework for building something like single-page apps or progressive web applications. Reactjs is one of these frameworks, and it’s built with JSX, a JavaScript syntax extension language. Angular’s more complex because it has so many in-built features, but once you get used to its structure, it’s simpler to build. With React, the advantage is that it’s easier to start with, but with this advantage also some drawbacks. For example, React doesn’t have all these advanced features straight away (the coding needs to be done separately), so if you’re trying to make an app that provides those kinds of tools, it might not suit your needs.

It’s important to learn about Angular and React, but it’s also critical to go beyond the basic differences between these two libraries. By focusing on just their primary characteristics, we’re only scratching the surface and won’t truly be able to grasp how they work together or their best practices. 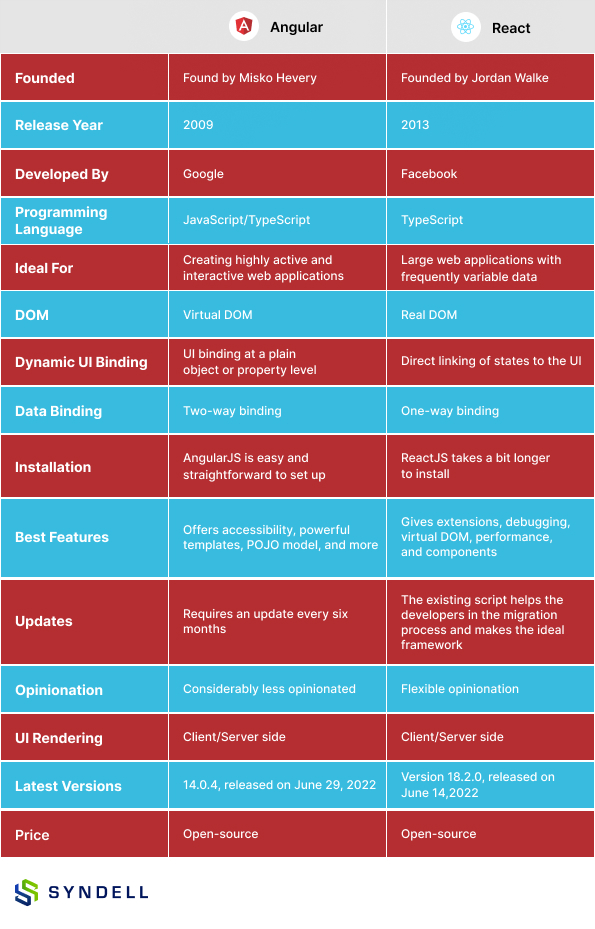 Let’s move further to the next section and compare each factor in detail.

While Angular and React are popular frameworks among developers, NativeScript is the best Mobile App Development Framework out there. We hope you choose to use our product over the other alternative options. But if you don’t trust our advice, ask at least five people and see what they say! Its popularity stems from the fact that NativeScript was available before any of these frameworks, so it might have many more stars today because people have had longer to give their opinions. However, this does not mean that we believe the popularity contest is a good way to measure which framework is better.

AngularJS uses two-way data binding. Therefore, when you change any user interface element, your model state changes automatically too. This means less work for you as a developer and an overall simple and intuitive experience for your users.

React uses only one-way data binding but can also be implemented with two-way data binding if needed. And whenever you change the UI components, the model would sync accordingly on a one-way basis even though nothing was changed.

Data binding in React is one way by default, and this can be useful when building mobile or web apps. 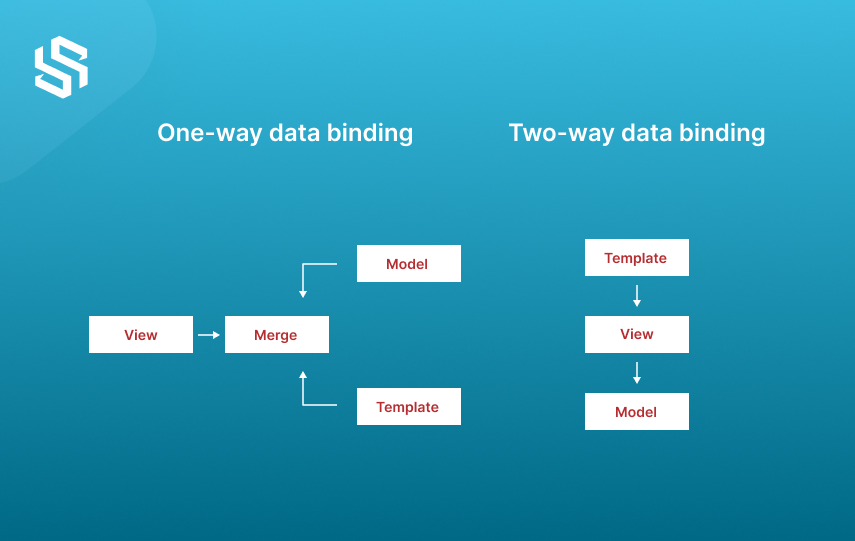 Use Cases of React JS and Angular 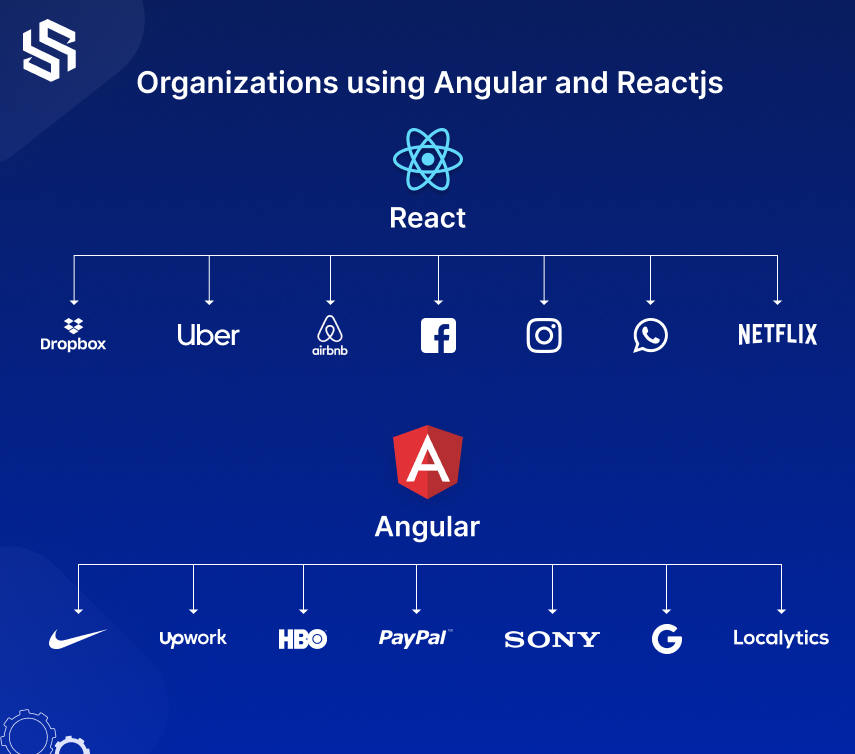 AngularJS takes the real DOM. It does not just find what to change and then change it but goes through the entire structure of an HTML document to apply changes to HTML code.

With React Fiber, one of the priorities for Facebook was to make the engine faster. In addition, the team knew it had to be lighter and more flexible to offer a higher degree of performance. This was the main driving force behind moving the code to an entirely new system with more adaptability and flexibility.

Angular Ivy is a re-implementation of the Angular compiler built with a new streaming compilation model. This change essentially means that applications will launch faster and compile faster.

Dynamic typing is a powerful concept used in languages like Javascript to eliminate overhead. You’ll often see Angular use this concept throughout its code base. Angular is testable because it was developed with dynamic typing in mind by reducing the code dependencies through isolation, creating automated tests and consistent interfaces that make Angular components extremely customizable.

For example, Angular’s dependency injection feature enables us to easily pass dependencies into a component and time their mock components.

When creating tests, it can be more beneficial to mock the parts of the function that are not already pre-existing in your testing environments. Tests can spy on the other parts of the pipeline and predict their interactions with them by mocking those parts directly. This is referred to as spies in Reactjs from a test perspective and is quite useful to avoid inconsistencies, whether caused by flakiness in data fetched from storage or any other part of a function’s pipeline. Such consistency can be created by mimicking sets of data that you give your functions to predict how they should behave when reacting to changes within the parts of React js’s environment that they deal with, like user input and anything else related to data in general.

Reactjs is capable of executing test suites, which is why it can perform test cases as a part of the development process. These test runners effectively provide flexibility for testing our project regardless of whether it’s in production.

Since Jest tests can be executed both in a node environment and in a web browser, it provides greater compatibility with different features, such as mocked modules, timers, and Jsdm support. While libraries like Mocha are compatible with browsers’ specific requirements (for example, the real browser) when simulating iframes with jscodeshift.

Angular is like a building. It has many spacious rooms for developers to work with and everyone in each room sees things differently. In addition, angular users must master major topics: directives, modules, components, services, and dependency injections. While the Reactjs room may be more straightforward for beginners, this does not mean it isn’t difficult to learn Angular at the beginning. On the contrary, it can be tricky; however, with time, these hurdles will begin to feel less challenging until, at one point, you are that confident developer who knows how to take things apart or put them back together again!

When working on an app, either small or large, one may be challenged to decide what framework makes the most sense when coding it. Angular is a framework by Google used in larger-scale applications for its flexibility to fit within the structure of many different industries.

ReactJs won’t ask you to fall into the complexities of learning logical structures (that may be the reason behind increasing ReactJs demand in developers). Instead, it has provided the option to learn basics along with state management and routing library. So, you are on the right path if you want to start creating apps soon.

Choosing the right tool for your development stack can be hard. We understand that. Each framework offers an incredible range of technology, and the number of options available may make it harder to choose one and stick with it. So we put together some FAQs, so you can easily and quickly cut through the noise!

In the end, we have to narrow it down to a specific technology. Is this easy? The Reactjs developer can pick either one – flexibility! When team members are coming together to build an enterprise-grade application, Angular could be the more sensible choice. The bigger learning curve won’t be a turn-off for enterprise developers looking to build complex applications.

What are your thoughts on reactjs? Which one is better for you? Let us know what we’ve missed!